I know, Halloween is over, but here report from my night.

Primarily we wanted to go to the pub with lots of others, but unfortunately our parents didn't allow that so while Cecilia and Claudia stayed at home, I went trick-or-treating with my sisters and Aliesha's friends. I had no costum, so they made my make-up and shirt in 10 minutes for me! The result: 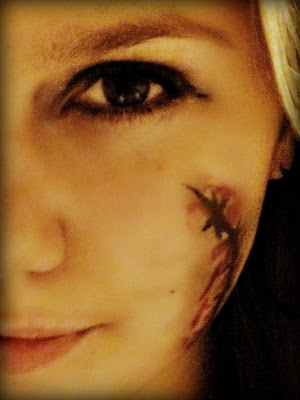 Yeah, it was fun (and freezing), walking around the houses with them. You really can see that Halloween is much bigger here in Ireland than in Germany! One house had every room lightened in another colour, so the widows glowed colourful in the dark. Then, when they opened the door, there was mist wafting around the houseowners' feet, music came from somewhere in the house and of course the people were also dressed up. Pretty cool. :D
In front of another house we saw a huge air-filled pumpkin with three gosts coming out of it. The whole thing was twice as tall as me!
We also saw a couple of fireworks in the sky - beautiful.
At home again, the first thing we did was warming up ourselves in front of the chimney... We were pretty frozen. :P
So that was my cool Irish Halloween!

When we drove to Dublin on Monday there was one thing I noticed; on the motorway there were thousands of shields saying things like "Ever drink, never drive" or "Arrive alive".  Apparently the Irish are not soo considered drivers.