Scrabble and tea at school

I had an interesting Friday (last week).

1. Abi Gag
In Germany, we have the tradition that the classes leaving school are granted one day to celebrate in school. This is called "Abi Gag". Here in Ireland the TYs (transition years, transition year is an optional year between 3rd and 5th year) are the ones doing that - well, at least a bit. They offered face painting - as a consequence everyone walked around with smileys or whiskers on their cheeks - and danced for a very long time. All that only at lunchtime, so you cannot really compare it with the German (and also in other countries familiar) celebration of students, who do a lot more.

2. Why Mr Forest is the best
Friday was the last day for Manon, the French student. We had told our History teacher Mr Forest the day before, and now guess what he did!
He brought Muffins for everyone to celebrate! And as if that had not been enough, the next thing he asked was: "Tea or coffee?" Manon and I stared at him in disbelief. "Is...is that a serious question?" eventually Manon asked. "Of course it is!" And so we had tea and muffins in History, while we actually should study Britain in the second worldwar. 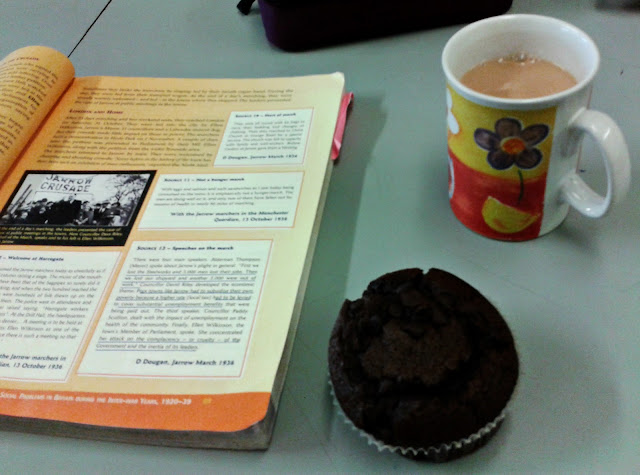 
3. Where my skills are needed
(On Friday) I went to a meeting in school, where you should go if you are interested in photography. We will take photos for the school! From the clubs (like Rugby or Hurling and stuff) and other events. That is so cool! :D I really really hope we have things to take photos from before I have to go home.

4. How to excuse professionally
In English we had as an exeption my EFL (English as a foreign language) teacher. Somewhere in the middle of the class, another teacher brought a little (~12 yrs old) boy to stay in our class because he had forgotten his copybook. As it is the kind of my teacher, he had to tell the boy what he should have done instead of just saying "I forgot my copy".
"Ok, do you know what you will say next time? You will say that you were up in your room, studying your experiment, when your mum called you down for dinner. You brought your Science copy down and forgot in on the microwave. Unfortunately your dog ate it. And then your sister ate the dog. So there is no way to get it back."
And that is what our teachers are like.

Where you see the change
The meals here usually come with potatoes, how you would it expect from Ireland. However, most times these are just in the form of chips - but selfmade ones.
Sunday is the exception. On Sunday morning, you wake up with the smell of sausages in your nose and the sound of frizzling things in the pan in your ears. On Sunday, we have a traditional Irish breakfast (as also England has). Sausages, rolls, Ketchup, fried eggs... For me of course vegetarian sausages. You cannot imagine how much of an effort it costed me to eat these things at 10 o'clock in the morning! But now I am used to it. Another example how Ireland influences my lifestyle.

It is hard work
Wednesday. A quite sporty day. I came home from school, already able to go to bed again. I had about one hour to do a bit of homework, then went to badminton. I played a single against a younger girl I originally should play on Friday, but she would not have time then so we brought it forward.
I won. Back home afterwards, but just for another hour of studying the Nuremberg Rallies for History. Then, badminton again. This time it was my ordinary badminton, just that I had the first League match. After winning the double as well as the mixed, I was exhausted. Totally exhausted.
Next Monday and Wednesday again - some doubles and a mixed. Puuh.
But well, it really is fun.

Becoming a teacher
Today my EFL teacher asked the delighted Karla if she wants to help him teaching German! Of course I want to!
I really don't know why I like that so much...
Anyway, so next Monday I will probably "teach" some 3rd years!

Learning through play
We had a nice ELF class today. We (the not-so-good-English-speakers) played scrabble together! :D